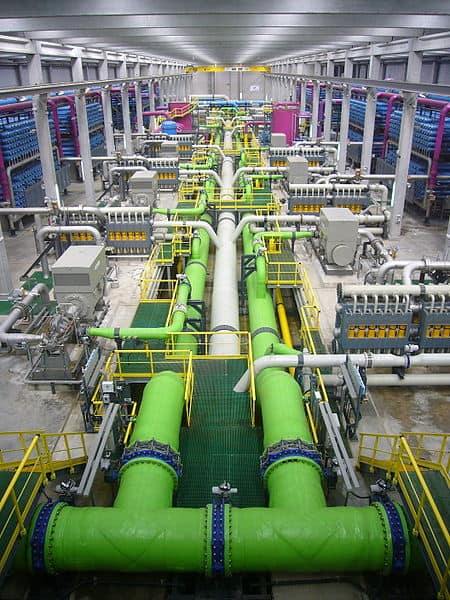 Access to clean water is now a major concern, growing in scope and necessity as a cornerstone of modern civilization. Till now, the major focus has been recycling and using brown water for agriculture. But if you don’t have water in the first place, recycling and using brown water mean little. Estimates are that we use an average of 100 gallons of water a day for bathing, cooking, washing, recreation and watering. This does not include the massive amounts of water we use to grow food and satisfy industry. It takes 1 million gallons of water to irrigate an acre of potatoes.

The state of California is now considering building the largest water desalination plant in the U.S. Called the Huntington Beach desalination project, the facility is projected to produce 50 million gallons of potable water a day – enough for 500,000 people. There are roughly 21,000 desalination plants around the world.

The largest desalination plant is at At al-Jubail, on the Arabian Gulf, which produces about 500 million gallons a day.

Should desalinated water be piped inland to drought stricken areas in the Southwest or for agricultural production?